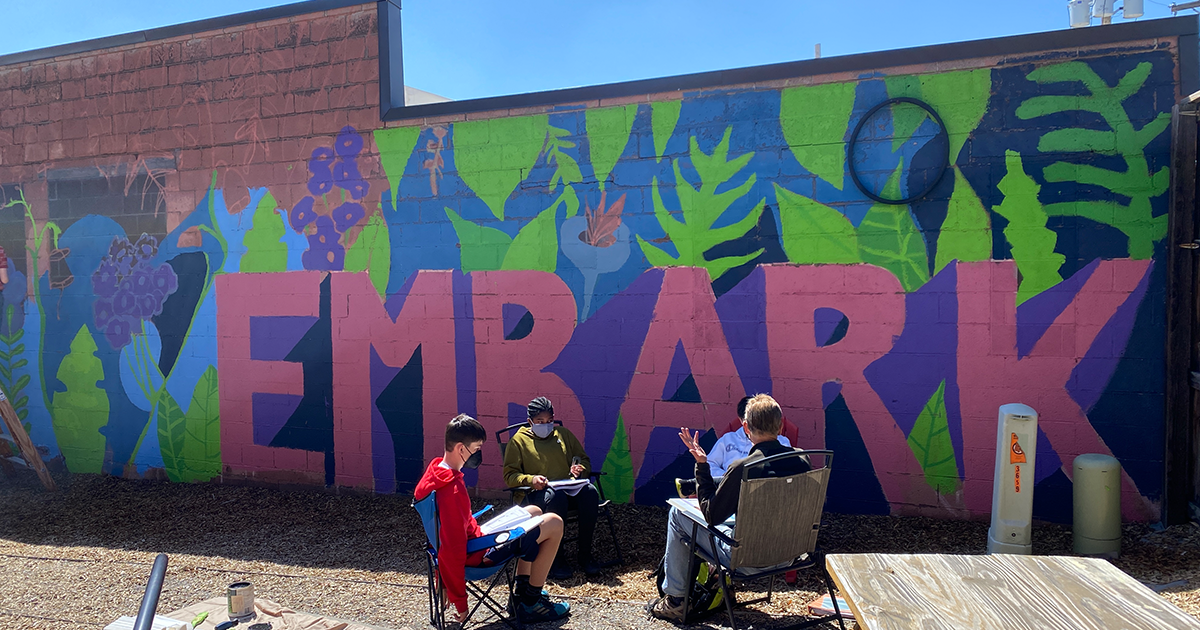 Putting learners in the driver’s seat

Educator and entrepreneur Miguel Gonzalez on what it takes to create “learner-centered” spaces for kids and adults.

As told by Miguel to Yvonne

After years teaching middle school, Miguel stepped out of the classroom to found Embark, a micro-middle school in Denver. Miguel is also the founder of Iterative Space, a paid fellowship for educators to exchange ideas about innovative learning and bring passion projects to life.

Q. You often describe your approach with young people and adults as being “learner-centered”. What do you mean by that?

A. Learner-centered is actually pretty self-descriptive, which is to say that the learner is the most important person in the learning process. Too often, in schools we focus on content and knowledge and lose sight of the learner.

Q. I feel like half of what growing up is about is discovering one’s own needs. Can you talk about how you approach supporting students to uncover their needs?

A. When you're working with adolescents it’s a pretty easy conversation. Just ask, are you happy here? Is this what you want to be doing? And when you really allow for honesty, oftentimes they're like, “No, I'm not.” That’s when we can start to figure out together what they need to feel successful. Most of the times I’ve had those conversations they’ve been with students who have been successful in traditional schools. And then you put them in a school like Embark, that's embedded in two small businesses, and built on a lot of autonomy, agency, and trust, and that pushes young people to rediscover what success means. At Embark, we’re just not playing by the same rules.

Q. How would you describe the rules at Embark?

A. We're not playing by the same rules because we're not even playing the same game. At Embark, we ask kids and adults to show up every day to learn. In the traditional system, the goal is to show up every day to school. I think that people within the traditional system are really great people, but their job is to try to get a kid from fifth grade to sixth or move them along on a predictable trajectory. We definitely want our students to go into high school and be successful, but our primary interest is making sure they are successful in life. And we don't see life happening after high school. We see life happening now. In the traditional system, you often hear: we're preparing you for college, or we're preparing you for your future career. At Embark, we're preparing kids for the life that they're living now.

We're not playing by the same rules because we're not even playing the same game. At Embark, we ask kids and adults to show up everyday to learn. In the traditional system, the goal is to show up every day to school.

Q. Embark has an amazing reputation for being a place where every single kid is deeply known, understood, and cared for. What do you say to critics who say that you're able to cultivate that kind of deep community and trust only because you're working at such a tiny scale?

A. It’s true. I see learning happening in a triad: there's the educator, there's the learner, and there's the environment. And learning happens in the space in between each of those things. What Embark has chosen to do is invest into those spaces instead of investing into other spaces. For people in larger systems, I don't actually think that they should try to replicate what we're doing. Our hope is that we can inspire people to rethink how they’re investing in the relationship between educators and learners, or learners and their environment, or educators and their environment.

Q. I’ve loved talking with you as always. So to close, drop a little wisdom on us.

A. We spend so much time in schools planning what we want kids to know and be able to do. As we start our new school year at Embark, I’m asking myself and my colleagues a different question: “What do we want kids and adults to experience and feel when they engage in learning?” I believe that when people feel connected to their learning then they share what they know and can do with so much more conviction and passion.

Founder of Embark and Iterative Space